Not that I thought that I was any great drawer, but I did feel like I was putting an orderliness to the chaos around-something like Red did, 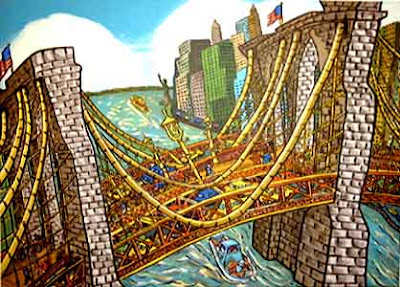 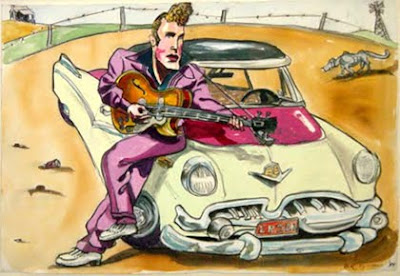 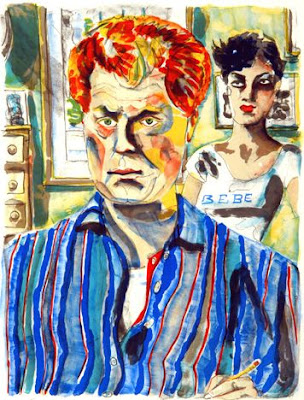 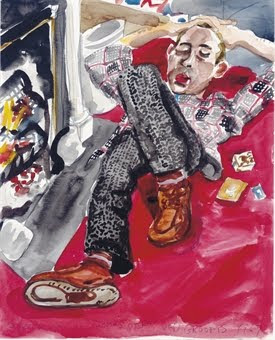 A new world of art was opening up my mind. Sometimes early in the day we'd go uptown to the city museums, see giant oil-painted canvases by artists like Velizquez, Goya, Delacroix, Rubens, El Greco. Also twentieth-century stuff-Picasso, Braque, Kandinsky, Rouault, Bonnard. Suze's favorite current modernist artist was Red Grooms, and he became mine, too. I loved the way everything he did crushed itself into some fragile world, the rickety clusters of parts all packed together and then, standing back, you could see the complex whole of it all. Grooms's stuff spoke volumes to me. He was the artist I checked out most. Red's stuff was extravagant, his work cut like it was done by acid. All of his mediums-crayon, watercolor, gouache, sculpture or mixed media-collage tableaus I liked the way he put the stuff together. It was bold, announced its presence in glaring details. There was a connection in Red's work to a lot of the folk songs I sang. It seemed to be on the same stage. What the folk songs were lyrically, Red's songs were visually-all the bums and cops, the lunatic bustle, the claustrophobic alleys-all. the carnie vitality. Red was the Uncle Dave Macon of the art world. He incorporated every living thing into something and made it scream-everything side by side created equal-old tennis shoes, vending machines, alligators that crawled through sewers, dueling pistols, the Staten Island Ferry and Trinity Church, 42nd Street, profiles of skyscrapers. Brahman bulls, cowgirls, rodeo queens and Mickey Mouse heads, castle turrets and Mrs. O'Leary's cow, creeps and greasers and weirdos and grinning, bejeweled nude models, faces with melancholy looks, blurs of sorrow-everything hilarious but not jokey. Familiar figures from history, too Lincoln, Hugo, Baudelaire, Rembrandt-all done with graphic finesse, burned out as powerful as possible. I loved the way Grooms used laughter as a diabolical weapon. Subconsciously, I was wondering if it was possible to write songs like that.

About that time I began to make some of my own drawings. I actually picked up the habit from Suze, who drew a lot. What would I draw? Well, I guess I would start with whatever was at hand. I sat at the table, took out a pencil and paper and drew the typewriter, a crucifix, a rose, pencils and knives and pins, empty cigarette boxes. I'd lose track of time completely. An hour or two could go by and it would seem like only a minute. Not that I thought that I was any great drawer, but I did feel like I was putting an orderliness to the chaos around-something like Red did, but he did it on a much grander level. In a strange way I noticed that it purified the experience of my eye and I would make drawings of my own for years to come.
chronicles by bob dylan
Posted by gloria @ 1:10 AM